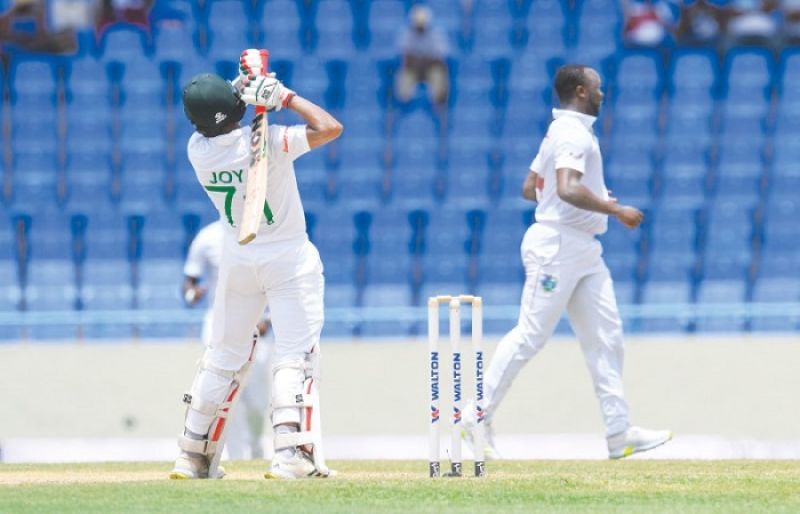 Bangladesh lost four wickets in the morning session to reach lunch at 115-6 in their second innings on day three of the opening Test against the West Indies on Saturday, still needing 47 runs to make the hosts bat again.

Najmul Hossain Shanto survived around 40 minutes but Kyle Mayers set him up and then Mominul Haque later brilliantly. He bowled a host of outswingers to Najmul and then delivered one that went in with the angle and the southpaw edged it to slip. He made 17.

Mominul Haque was similarly set up and the only boundary from his bat came off an inside-edge. A few minutes later, a similar incoming delivery got the better of him as he was adjudged leg-before.

Litton Das played a controlled pull shot for a boundary and struck two fours on the off side. But the right-hander was guilty of chasing a short and wide ball and was caught at slip.

Mahmudul Hasan Joy showed great composure for more than three hours. He left balls outside off, dead-batted the ones that pitched on or around off-stump and played straighter ones to the on side. But a lapse in concentration caused him to throw his bat at one outside off and ended up getting caught at slip. He scored 42 off 153 balls.

Skipper Shakib Al Hasan was unbeaten on five and Nurul Hasan on two.

Bangladesh had closed at 50-2 on Friday, having dismissed the West Indies for 265 in their first innings.

Captain Kraigg Brathwaite anchored the home side’s effort with a typically painstaking 400-minute knock of 94, supported by 63 from Jermaine Blackwood, the vice-captain taking a page from his leader’s operational manual as the contribution was the slowest of his 16 Test half-centuries.

For the Bangladeshis, forced onto the back foot after being routed for 103 just after lunch on day one, Brathwaite’s dismissal triggered their brightest period of play with the home side losing their last seven wickets for 68 runs.

While it was seamer Khaled Ahmed who initiated the slide by consigning the home skipper to his fifth ninety in Test cricket, Mehidy Hasan then stole the show in claiming four of the last six wickets to fall either side of the tea interval.

He also took a sharp catch at short extra-cover as Blackwood became the ninth wicket to fall in pursuit of quick runs.