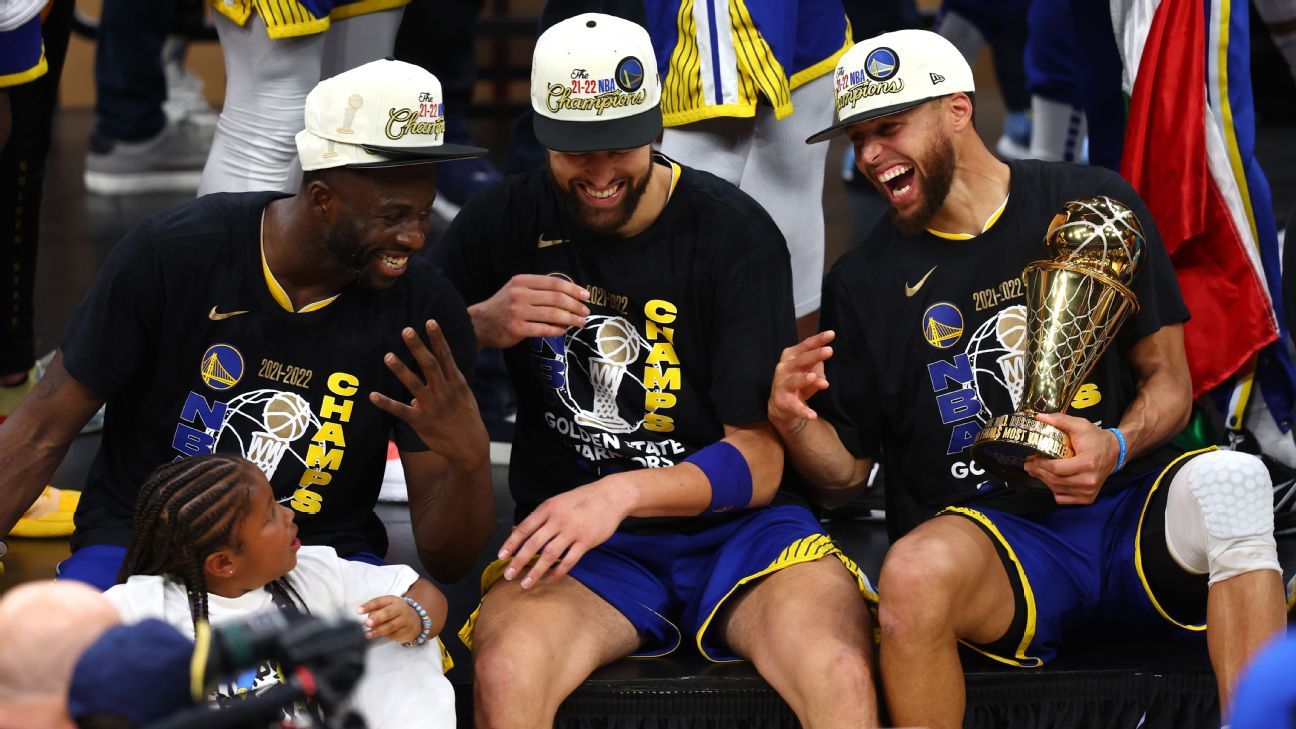 BOSTON — As the final seconds wound down in Game 6 of the NBA Finals between the Golden State Warriors and Boston Celtics, Stephen Curry crouched down on the baseline and placed his head in his hands.

At center court, Klay Thompson and Jordan Poole shared a long embrace. On the left side of the court, Draymond Green and Andre Iguodala exchanged several high-fives before going in for a hug.

Golden State was just two seconds away from clinching its fourth NBA title in the past eight years.

The moment the emotions sink in after a championship win isn’t new for Curry, Green and Thompson. But this title, this moment felt different.

“This one is definitely different because of the three years of baggage we carried coming out of that Game 6 in 2019,” Curry said. “I can say it now, I don’t know how many teams could carry that as long as we have with the expectations of comparing us now to teams of past and make it to the mountaintop again.”

The Warriors won their first title since 2018 and became the first team to go from the NBA’s worst record to a championship in a three-season span. They were a league-worst 15-50 in 2019-20.

The last Game 6 of the Finals the Warriors played is considered one of the most difficult and crushing nights in Golden State history. It was the night they lost the championship. It was the final night of their superteam roster. And most importantly, it was the night Thompson tore his left ACL.

This time last year, Thompson was just starting to run again, after he also tore his right Achilles in the fall of 2020. But after Game 6 of this year’s Finals, Thompson wouldn’t leave the trophy presentation stage.

At the start of the season, any discussion of the Warriors’ title aspirations would have to be prefaced with “once Klay returns.” But even before Thompson’s return, he saw something in his team.

“People called me crazy. I said championship or bust because I saw how we came out of the gates,” Thompson said. “I knew we had a chance to do something special, and here we are. It’s so incredible. Wow.”

But Thompson and Curry haven’t forgotten those who said they couldn’t do it.

“A lot of chatter. A lot of doubters. But you know what, you just put that in your fuel tank and you just keep going. And it does definitely hit different,” Thompson said. “I’ve got a memory like an elephant. I don’t forget. There were a lot of people kicking us down.”

Curry added: “The conversations about who we were as a team and what we were capable of … we hear all that, and you carry it all and you try to maintain your purpose, not let it distract you, but you carry that weight. And to get here, it all comes out. It’s special.”

In Green’s case, he issued the league a warning early in the season of which he reminded everyone after the game: “I told y’all on there before, don’t let us win … and they let us win a championship, and you going to hear about it.”

Of the Warriors’ trio of Curry, Thompson and Green, Green was the player who was around the organization the most as it went through its turbulent past two years. While Thompson was rehabbing his multiple injuries, Curry was nursing a broken hand. Green, meanwhile, was trying to be the lone veteran leader among a team of young newbies.

His series against the Celtics was far from consistent — and he’ll be the first to tell you.

“You watch Game 1, I did not have a bad Game 1, and I had an incredible Game 2,” Green said. “And Game 3 was kind of like, terrible, awful. And Game 4 was not my best effort but not totally special. And Game 5, Game 5 I was pretty solid. Came out with great energy. Game 6, I dominated.”

In Game 6, Green scored 12 points on 5-of-10 shooting with 12 rebounds, 8 assists, 2 steals and 2 blocks. He also hit two 3-pointers after missing his first 12 attempts of the series. He struggled on the other end, however. With Green as the primary defender, the Celtics shot 9-of-17 from the floor.

Curry led the way for Golden State on his way to his Finals MVP award, finishing with 34 points on 12-of-21 scoring, including 6-of-11 from 3-point range. He added 7 assists, 7 rebounds and 2 steals. Thompson added 12 points.

“Steph, Klay, Draymond, what they have done in this league and the foundation they have been able to build, you’ve got to give them a lot of credit,” Iguodala said. “In a hundred years, you’re going to be talking about some of the best players and teams and foundations, and those three guys, they kind of did a template of how do you build championship pedigree.”

But Thompson was quick to note that the Warriors’ championship-clinching game — and their title run in general — wasn’t just done by the three cornerstones.

“This is a collective season,” he said. “Strength in numbers is alive and well.”

On Thursday, Andrew Wiggins continued his strong series, finishing with 18 points, 6 rebounds, 5 assists, 4 steals and 3 blocks. Poole added 15 off the bench, while Gary Payton II, although scoring just six points, finished with a plus-18 net rating.

And throughout the series and their playoff stretch, the Warriors saw the emergence of Kevon Looney, got reliable performances from Otto Porter Jr. and even saw contributions from teenagers Jonathan Kuminga and Moses Moody.

It was a synopsis of what carried the Warriors through the regular season, as they battled injuries and didn’t have a fully healthy roster until the playoffs. And even then, their lineups and rotations were still evolving.

“We kind of limped our way into the postseason, and we clearly said, we have to peak at the right time, not knowing what our rotation was going to look like and what our chemistry was going to look like, because that’s what the situation called for,” Curry said. “But, damn, we did it. It’s crazy to think about.”

He added: “These last two months of the playoffs, these last three years, this last 48 hours, every bit of it has been an emotional roller coaster on and off the floor; and you’re carrying all of that on a daily basis to try to realize a dream and a goal like we did tonight.”

The smell of champagne and cigar smoke filled the tunnels of TD Garden as the Warriors’ locker room celebration ensued. The sound of popping bottles was distinct, while chants and hollers rang out of the room.

Poole danced down the hallway as he made his way to his teammates. Wiggins draped the Canadian flag over his shoulders and kissed his daughter. Damion Lee said he was still shaking, as he snacked on a slice of pizza. General manager Bob Myers stood barefoot on the court drenched in champagne and beer.

The Warriors were two hours removed from winning the NBA title. But the emotions were still running high. There was a familiar feeling racing through the locker room, but at the same time, it was brand new.

“You get goosebumps just thinking about, you know, all those snapshots and episodes that we went through to get back here, individually, collectively,” Curry said. “And that’s why I said I think this championship hits different. That’s why I have so many emotions, and still will, just because of what it took to get back here.”