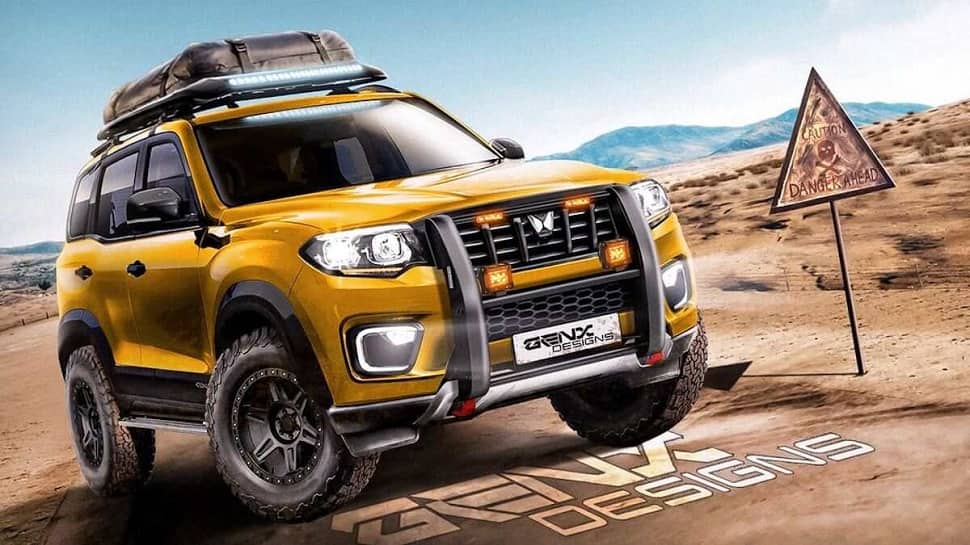 The all-new Mahindra Scorpio-N is coming soon to the showroom floors. The ladder-frame SUV’s arrival in the new avatar is making the patrons have a hard time waiting for it. A slew of spy shots of the SUV has cropped up on the internet, along with various renderings showing the upcoming Scorpio-N in distinctive avatars. The latest comes from the Instagram handle of genx_designs, who’ve rendered an expedition-ready rendition of the forthcoming SUV. We should add that the rendered avatar of the Scorpio-N looks every bit ready for an expedition. In fact, a lot of such examples would be seen on the roads once the Scorpio-N is launched.

The digital artist has tweaked the exterior of the SUV with the application of a hefty bull bar on the front that houses marker lamps as well. Moreover, a set of auxiliary lamps and a luggage carrier sit on the SUV’s roof. Over to the sides, the artist has managed to fit a set of off-road rims, which feature bead locks and are shod with mud-terrain tyres. Furthermore, red tow hooks and a study metal scuff plate are fitted on the front end.

A new bright-yellow paint scheme further amplifies the Scorpio-N’s appeal. The chrome bits are now blacked out, and they give a solid contrast to the overall appearance of this digitally modified example. Such modifications also have the potential to use a lift kit for increased functionality. A bump in power and torque can also be achieved via engine remaps. However, these modifications hold no ground on a digitally tweaked vehicle.

Talking of Scorpio-N’s powertrain choices, the SUV will be on sale with both petrol and diesel engines. Choice of manual and automatic gearbox will be available, in addition to the availability of 2WD and 4WD layouts. To pamper occupants, there will be a host of equipment on board. Features like an electric sunroof, touchscreen infotainment unit, dual-zone climate control and more will be offered on the upcoming Mahindra Scorpio-N.