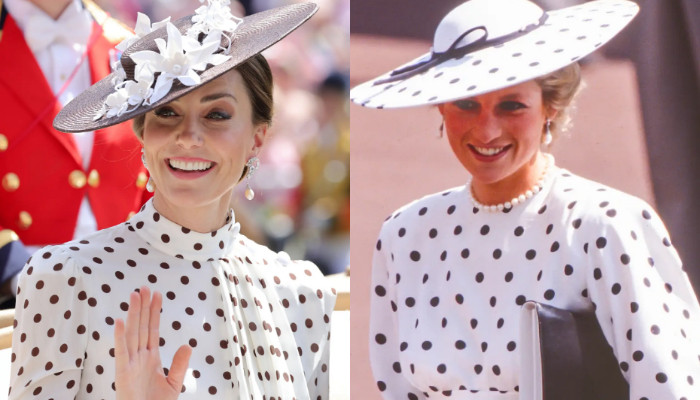 Kate Middleton made a surprise appearance at the Royal Ascot races on Friday, and turned heads in a classic polka-dotted look reminiscent of her late mother-in-law Princess Diana at the same event in 1988!

As pointed out by Page Six, the Duchess of Cambridge stepped out at the famous races in a timeless Alessandra Rich dress with brown polka dots all over it, a similar style to the Victor Edelstein look that Princess Diana rocked at the Ascot races in the late 80s.

Kate’s tribute to her husband Prince William’s beloved mother didn’t stop at the dress; she also brought out Diana’s iconic diamond and pearl drop earrings for the event, styling her hair in an elegant updo to show them off!

The highly sought-after earrings were seen on Diana all the way back in 1992 during a visit to Korea.

Kate earlier wore the heirloom earrings at the 2019 BAFTAs in London.

The Duchess of Cambridge’s appearance at the Royal Ascot marked only the fourth for her since becoming a part of the royal family.

Ben Affleck chooses brother Casey over Matt Damon to be his best man?