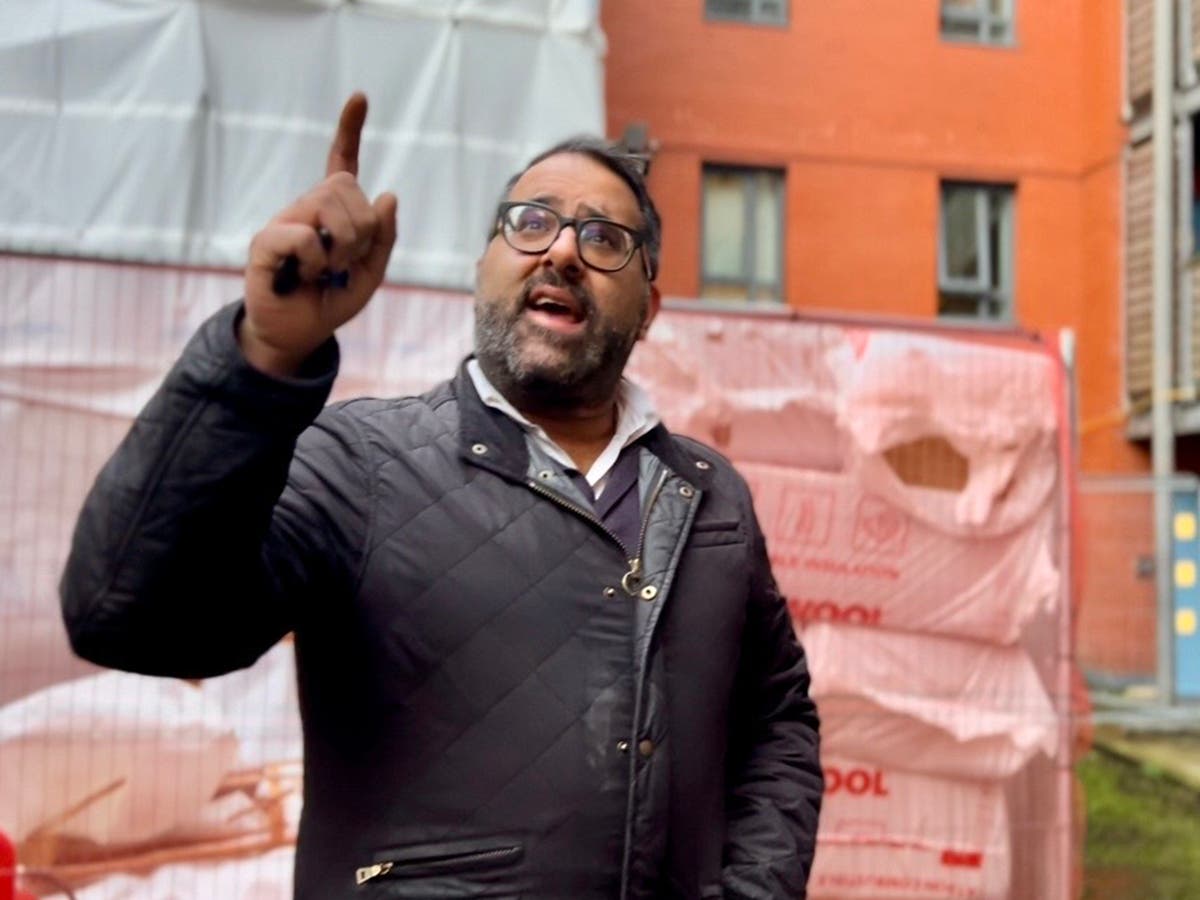 “The last few months have been the most painful, most stressful of my life,” says Giles Grover, a leaseholder who is campaigning to bring an end to Britain’s building-safety scandal. Hundreds of thousands of residents are going through what Grover describes as a “living nightmare”, involving huge bills, years of stress, dark homes covered in plastic sheeting, and the ever-present danger that their building could be engulfed in flames.

Five years after the deadly blaze that killed 72 people in Grenfell Tower, it is a nightmare that shows no sign of ending soon.

Since a few weeks ago, Grover has been in India, caring for his dying mother during her final days. Despite the most difficult of personal circumstances, and being thousands of miles away from his flat on the outskirts of Manchester city centre, cladding is rarely far from his thoughts.

When he is not by his mother’s bedside, he frequently jumps on calls with senior civil servants, and occasionally with housing minister Michael Gove – the man tasked with fixing one of the worst public policy failures in living memory.

“I would rather be focused on my personal life right now,” says Grover. “But until Michael Gove actually delivers on his promises I’m not going to stop badgering him.”

Nothing would have changed, it seems, without tireless campaigning from Grover and many others.

Leaseholders have been on a draining journey, fighting for every inch of progress against a government that appears ideologically opposed to accepting the inevitable: that the only justifiable solution to this crisis is for the state to guarantee that it will pay for all costs that cannot be recovered from developers.

As things stand, leaseholders are still on the hook for up to £15,000 of costs, plus any money they have already spent on things like smoke alarms and fire safety patrols. Landlords who have multiple properties, along with people living in high-value flats, must pay for their own remediation, which could amount to more than £100,000 per property in some cases.

The government’s proposed solution also requires developers to cough up the cash, something that many are not willing to do. Years of litigation loom. Other developers have gone bust, or are based overseas, beyond the reach of UK laws.

“We warned the government that developers would just push back and say ‘No, we don’t want to do this,’” says Grover.

“What we now have is four or five different schemes. It’s massively complex. How long will it all take?”

Government dithering has meant that work hasn’t even started on most of the blocks that are covered with dangerous materials. Now, massive price increases for building materials, and a drastic shortage of labour, mean that the costs of remediation are spiralling and delays are getting longer.

Official figures published each month focus on a very narrow category, that of the few hundred blocks that have the very worst cladding: aluminium composite material (ACM).

In essence, ACM is a chunk of highly combustible plastic with a thin sliver of metal on the outside. When a fire breaches the metal, it finds a rich reservoir of fuel, and licks up the side of a building at alarming speed, creating an inferno of staggering ferocity.

According to one fire engineer’s calculations, cladding a highrise building with ACM is comparable to strapping a 19,000-litre oil tanker to its walls.

Arconic, the company that made the panels used on Grenfell, knew this, but chose to continue selling the panels for use on highrise buildings anyway, the Grenfell Tower Inquiry has heard.

But the safety scandal is much, much broader than just ACM. There are many other combustible materials used in construction, and the government’s initial focus on one particular material was a piece of sophistry that attempted to hide the almost incomprehensible scale of the safety defects that have been uncovered.

More recently, there has been a recognition that the problem is not just ACM, and that “external wall systems”, including cladding, insulation, window frames and cavity barriers, must be assessed as a whole. But even this fails to recognise that there are yet more problems being uncovered behind the facade.

Tens of thousands of blocks are affected, but the government still does not know exactly how many, or how unsafe each one is.

Combustible cladding was banned in 2018 on buildings over 18 metres tall. Under new rules finally announced this month, only some types of combustible material will be banned on blocks of between 11 metres and 18 metres. Grenfell-style cladding will no longer be allowed on any new development.

“Everything from the government so far has been piecemeal. Too many people are still being left out,” says Grover.

“All we want is a simple piece of legislation saying leaseholders won’t have to pay.”

Grover has no idea when his own ordeal will end. Work began months ago at his development, City Gate, but has been plagued by delays.

Meanwhile, residents have lived on a noisy building site. Bags of rockwool insulation material and rows of metal fencing clog up what was once a pleasant courtyard.

Scaffolding adorns the external walls, holding up a vast sail of plastic that blocks out natural light and sounds like rumbling thunder when the wind catches it.

Earlier this year, Grover and other residents were evacuated after a fire started in their block. Firefighters quickly extinguished the flames, but it served as a chilling reminder of what could happen.

At New Providence Wharf, a development of flats within view of the gleaming skyscrapers of London’s financial district, Natalie Carter is desperate to move out of a flat that no longer feels like home.

“It’s oppressive. It’s depressing,” she says, looking out onto a grey expanse of plastic where once there was a wide vista of the Thames.

Builders clatter along the scaffolding within inches of Carter’s windows, to the backdrop of a loud chorus of whining from angle grinders and the beep of a reversing construction lorry.

Work has been delayed by six months so far, and residents are not confident that the latest deadline will be met.

Like Grover, Carter has had a frightening reminder of what is at stake. In May last year, a fire ripped through one of the flats in a building on the same development, sending flames up the balconies on three floors and filling corridors with acrid smoke.

Thanks to the rapid response of firefighters, the blaze was extinguished before it engulfed the cladding panels, some of which were made from the same material as those used on Grenfell Tower.

No lives were lost, but it could have been very different. London Fire Brigade found “serious” safety defects that resulted in the building acting like a “broken chimney” and caused a “potentially life-threatening situation”.

Perversely, the harrowing event could have saved leaseholders at New Providence Wharf a significant sum of money.

Before the fire, the developer, Ballymore, had agreed to pay £500,000 towards fixing the defects. After the blaze made national news bulletins, Ballymore agreed to cover all costs not met by the government, a total of more than £3m.

In a strange sense, Carter explains, this makes her one of the lucky ones, even if it rarely feels that way. Thousands of other leaseholders have no idea when work will start or who will be footing the bill.

“It’s encouraging that there seems to be more government money coming,” says Carter. “But what the government is doing is not being felt on the ground. People are still paying exorbitant costs.

“Even if they get their funding in place, it’s going to be years before there’s going to be the resources, and the supplies, and everything else to actually get on with the work. What do people do in the meantime? They’re being bled dry with costs like waking watch.”

The fact that this situation is replicated up and down the UK, five years after Grenfell, serves as a damning indictment of the government’s failure to fix a problem that, as the public inquiry has shown, was created by the government.

The systematic deregulation of Britain’s construction industry, along with the privatisation of safety tests, was supposed to free builders from the shackles of government bureaucracy.

Instead it created the conditions that allowed the horrific, and entirely avoidable, tragedy of 14 June 2017.

It has left behind a toxic legacy, and a bill that will probably stretch to tens of billions of pounds. In short, it proved to be the ultimate false economy.

Barristers working on the Grenfell Tower Inquiry have methodically uncovered a truly shocking lack of regard for people’s safety in the corridors of power, and a decades-long series of failures by both government and industry.

Counsels to the inquiry have accused the government of “covering up” the risks of dangerous cladding for years, and suppressing vital information that could have prevented the scandal, because of an “unbridled passion for deregulation”. The government became a “junior party” to the construction industry, the inquiry heard.

It has become clear that any suggestion that this scandal is the result of a few bad apples, or the shoddy work of one or two cowboy builders, is categorically false. The problems were cultural, and deeply ingrained, and the tone was set from the top.

The government knew in 2002 of the “catastrophic” results of a fire test on the exact material used to clad Grenfell, yet it failed to ban the material or alert the industry to its dangers.

It then compounded the error by shutting down an investigation into the fatal Lakanal House fire in 2009, and failing to implement the coroner’s recommendations.

That failure happened partly because of an obsession with cutting “red tape”. The coalition government demanded that for every new piece of legislation brought in, two had to be scrapped. This made it almost impossible to bring in new safety laws, even when the evidence showed that they were desperately needed.

Fire safety experts fear that lessons still have not been learnt, because the commitment to slashing rules and being seen as “pro-business” is so deeply ingrained.

Margaret Thatcher set things moving when she replaced “prescriptive” fire safety rules with vague and ambivalent functional requirements. Assessment bodies that signed off materials and buildings were privatised, meaning that they became reliant for their income on the very companies they were meant to scrutinise.

Tests were weakened, standards slipped, and the system was gamed. Cheap, combustible materials were marketed as safe, and builders installed them with abandon on highrise towers.

Going back to at least 1991, there were warnings that the widespread use of certain types of plastic panelling had increased the risk of a huge and deadly fire, but the deregulation agenda powered ahead.

New Labour did little to tighten things up, and its focus on improving energy efficiency meant that the incentives to insulate buildings with plastic-filled panels were strengthened.

Under David Cameron, the push to scrap “red tape” dramatically intensified. It became an article of faith among Conservatives that the bogeyman of “health and safety culture” must be slain.

It is against this ideological backdrop that Michael Gove entered the fray, in January this year, as the latest housing minister to be charged with fixing the mess.

Gove has been a Conservative MP for 17 years, and a minister since 2010. Can he be expected to mark the homework of a government of which he has been so firmly at the centre?

Many people stuck in unsellable homes are sceptical, believing that Gove has struck the right tone but there is not enough substance behind the rhetoric.

Gove is “good at managing the media”, but has delivered an “enormously complicated scheme”, says Grover.

“It’s helped Michael Gove achieve his political goals. It might have got the right headlines and allowed him to manage angry backbench MPs, but it hasn’t actually fixed this crisis.”