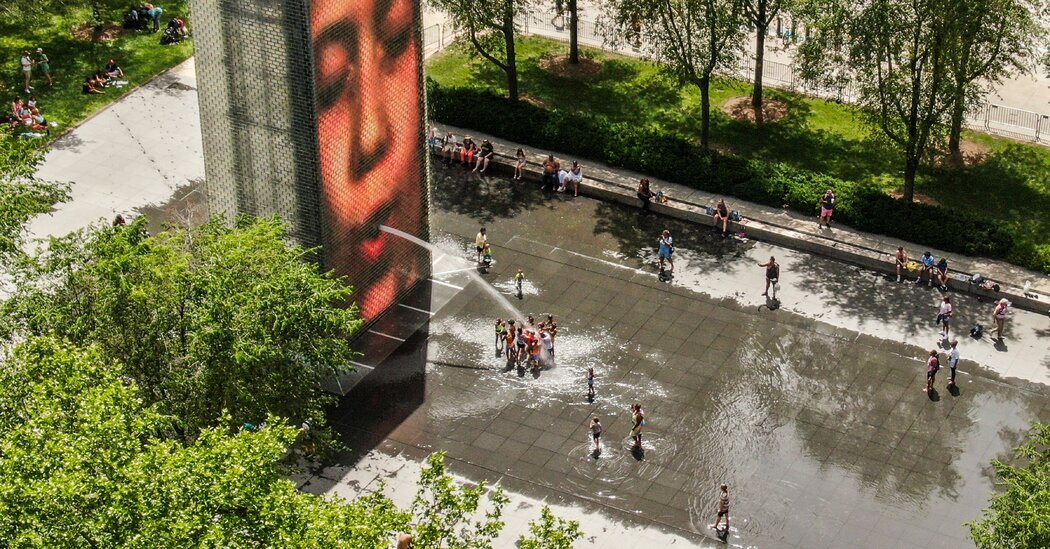 Millions of people were expected to suffer through blistering conditions again on Thursday with heat-related warnings and advisories in effect, mostly in the Midwest and Southeast, the National Weather Service said, adding that it may take weeks to see relief.

More than 60 million people from Southern California to West Virginia and as far south as Florida were under an excessive heat warning or heat advisory, meteorologists said. Residents in several states on Wednesday saw temperatures rise well into the 90s, and in some cases into the 100s, according to forecasters at the National Weather Service. They said hot temperatures were likely to persist across large sections of the country for several days.

By 9 p.m. Eastern on Wednesday, 17 weather stations had already broken their high temperature records for June 15, said Bryan Jackson, a forecaster with the National Weather Service, including those in Chicago (96 degrees), Atlanta (99), and Lansing, Mich. (95).

In Macon, Ga., temperatures rose to 104, a four-degree increase from the previous record for the date, set in 2011, Mr. Jackson said. Nine additional cities tied their records for the day.

“When you break record highs in June, it is pretty significant,” he added. “This is a particularly hot air mass that’s across the east-central U.S.”

Severe Weather in the U.S.

Steamy conditions were also forecast across portions of southwest Indiana, southeast Missouri, western Kentucky and Southern Illinois, where an excessive heat warning was in place through Thursday evening. Heat indexes will top out around 110 degrees. The Weather Service in Tallahassee, Fla., said the heat index was expected to rise up to 112 degrees and warned that soaring temperatures and high humidity may cause heat-related illnesses. Most of Arkansas, Missouri and parts of Kansas were also expected to be equally uncomfortable.

Next week, much of the east-central United States will continue to experience excessive heat, according to the National Weather Service.

Parts of eastern Texas, northern Louisiana and the Middle Mississippi, Ohio, and Tennessee valleys as well as the Mid-Atlantic and Southeast regions were also at risk of “rapid onset drought” from late next week, the Weather Service added.

Parts of the central Great Basin and the Southwest will also experience enhanced wildfire risk on Saturday, according to the service’s Weather Prediction Center.

In Kansas, about 2,000 cattle died over the weekend from the heat and humidity, said Matthew Lara, a spokesman for the Kansas Department of Health and Environment. “There wasn’t a lot of wind to help cool them,” Mr. Lara said of the animals. “It was just too hot.”

About 165,000 residents in Odessa, Texas, which faced temperatures above 100 degrees this week, have been without potable water for much of the week because of a water line break, officials said. By early Thursday, the city’s water plant was back online, and officials warned residents that the boil water notice would remain in place. In the interim, the Texas Division of Emergency Management was distributing bottled water.

Heat waves are becoming more frequent, hotter and longer lasting than in previous decades, scientists say. While tying a single one to climate change requires scientific analysis, the federal National Climate Assessment noted in 2018 that the frequency of heat waves had jumped from an average of two per year in the 1960s to six per year by the 2010s. The heat-wave season in the United States has stretched to 45 days longer than it was in the 1960s, according to the report.

This year seems likely to fit the trend. Much of the country will continue to see above-normal temperatures through nearly the end of June, meteorologists said. And a recent climate trend report from the National Oceanic and Atmospheric Administration said above-normal summer temperatures were likely across the contiguous United States through August, except for small areas in the Pacific Northwest and Northern Plains.

Excessive heat has become the norm in places around the world, and researchers have already started examining the ways in which extreme heat affects a range of people in intense environments, from athletes and soldiers to ordinary people. Scientists hope their work will help us better understand how many more people will be afflicted by heat-related ailments, how frequent and severe their suffering will be and how to best protect the most vulnerable populations.

Freeze-dried mice: How a new technique could help conserve species

Fields Medals in Mathematics Won by Four Under Age 40