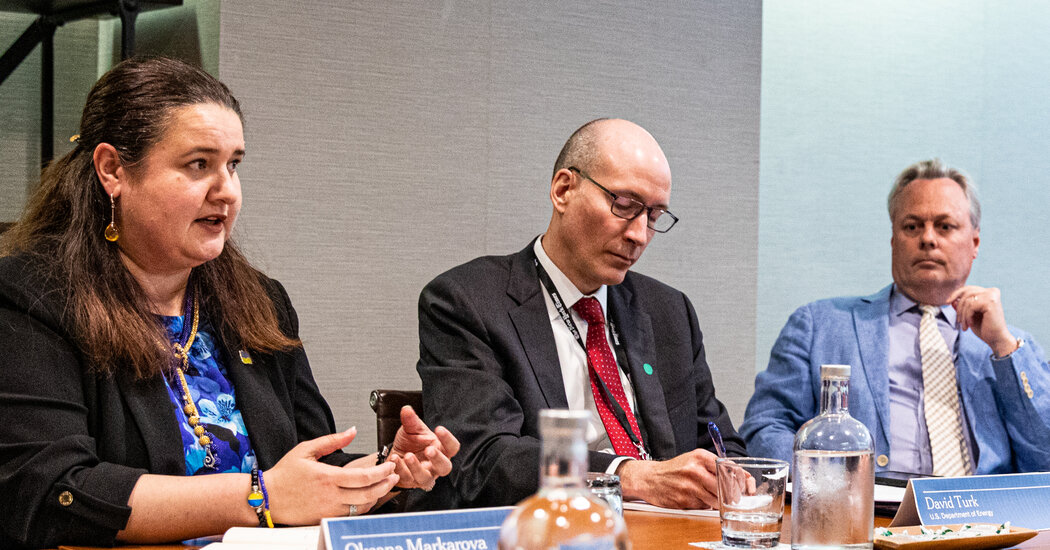 Maria G. Korsnick, president and chief executive of the Nuclear Energy Institute, a trade group that promotes nuclear power, said that the timeline was going to be much quicker than that — “like in the next year or two.”

The Russia-Ukraine War and the Global Economy

A far-reaching conflict. Russia’s invasion on Ukraine has had a ripple effect across the globe, adding to the stock market’s woes. The conflict has caused​​ dizzying spikes in gas prices and product shortages, and has pushed Europe to reconsider its reliance on Russian energy sources.

Russia’s economy faces slowdown. Though pro-Ukraine countries continue to adopt sanctions against the Kremlin in response to its aggression, the Russian economy has avoided a crippling collapse for now thanks to capital controls and interest rate increases. But Russia’s central bank chief warned that the country is likely to face a steep economic downturn as its inventory of imported goods and parts runs low.

Trade barriers go up. The invasion of Ukraine has also unleashed a wave of protectionism as governments, desperate to secure goods for their citizens amid shortages and rising prices, erect new barriers to stop exports. But the restrictions are making the products more expensive and even harder to come by.

Prices of essential metals soar. The price of palladium, used in automotive exhaust systems and mobile phones, has been soaring amid fears that Russia, the world’s largest exporter of the metal, could be cut off from global markets. The price of nickel, another key Russian export, has also been rising.

“We talk about things here, about large nuclear, because that’s what’s in our head,” she said. “I will just say, you are about to see a plethora of different opportunities for nuclear.”

“There’s still going to be a role for large nuclear,” she added. But designs for small modular and even micro plants “are coming out in the next few years.”

Nuclear reactors designed with modular technology can be built much quicker and cheaper than conventional ones, Ms. Korsnick added.

While the experts in the room said they believed nuclear energy has a big role to play globally, some said they did not think that was the case for the United States.

“I think in parts of the world where coal is still king, like in China and India, and when you have very large annual average growth of demand,” nuclear power could be a major player, Tyson Slocum, energy program director at Public Citizen, said.

But “we’re basically using the same amount of electricity in the United States today that we did over a decade ago,” he said. “So building nuclear power in a sort of negative demand environment doesn’t make a whole lot of sense.”

Freeze-dried mice: How a new technique could help conserve species

Fields Medals in Mathematics Won by Four Under Age 40