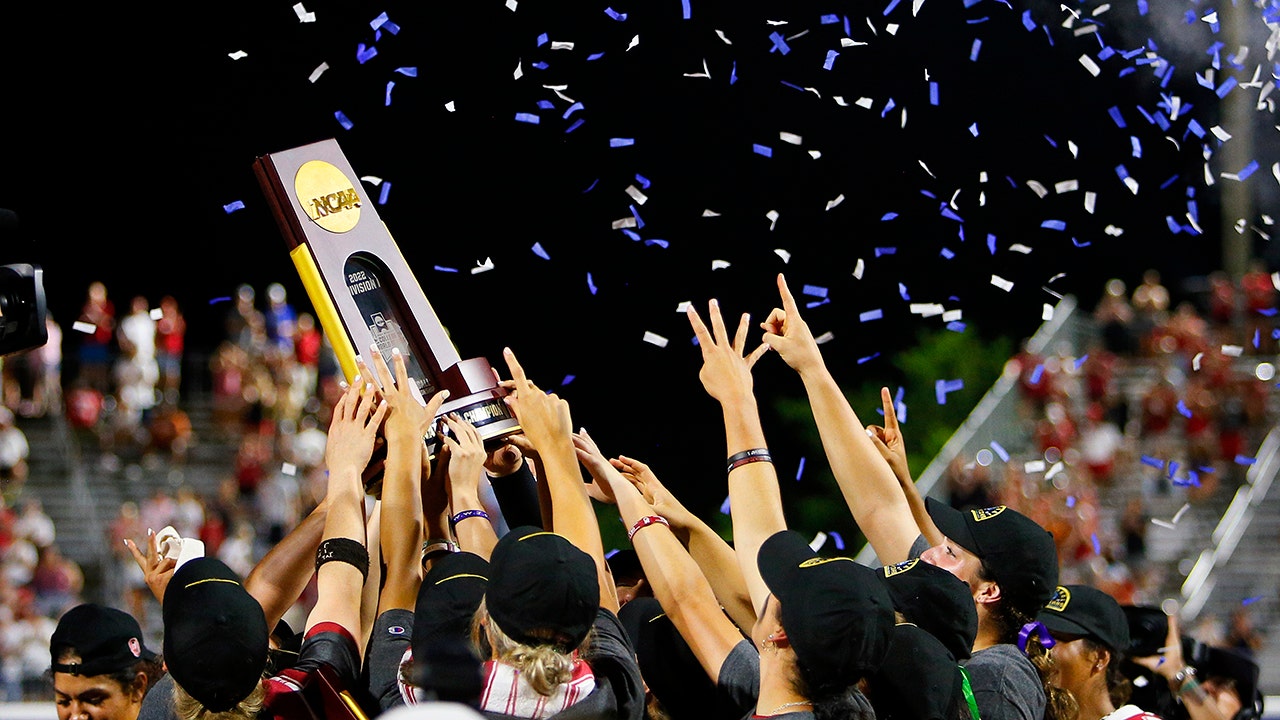 The NCAA is punishing 27-year-old Zac Collier for singing the national anthem at the Women’s College World Series matchup between Texas and Oklahoma State last week and flashing the ‘Horns Down’ gesture, deemed by the Association as “unsportsmanlike” and “offensive” in a nonsensical excuse to cut Collier’s mic.

The signage is commonly seen as a response to the Longhorns’ Hook’ Em Horns.

The Texas Longhorns meet at the pitching circle during the game against the Oklahoma Sooners during the Division I Women’s Softball Championship held at ASA Hall of Fame Stadium on June 9, 2022 in Oklahoma City, Oklahoma.
(C. Morgan Engel/NCAA Photos via Getty Images)

“I’m an Aggie; Texas was playing,” Collier told For The Win, detailing his experience performing at the game and the ridiculous ban that cost him his next singing gig.

“I was going to give them a ‘Go Pokes’ [hand gesture] and then a ‘Horns Down’ after the anthem. And that’s exactly what I did.”

Collier, a Texas A&M Grad, said he understood the contentious presumption taken from the gesture but noted that it wasn’t directed at the Longhorns staff or personal in any way.

He posted the email sent by the NCAA informing him that he would no longer be singing the anthem for an upcoming game as a result.

First baseman Courtney Day #15 of the Texas Longhorns is patted on the head by her teammates after hitting a solo home run against the Arizona Wildcats in the third inning during the NCAA Women’s College World Series at the USA Softball Hall of Fame Complex on June 5, 2022 in Oklahoma City, Oklahoma.
(Brian Bahr/Getty Images)

“There’s only one thing that they could consider an offensive gesture and mockery, and that would have been the ‘Horns Down.’ I didn’t say anything to the coaches. I didn’t flip anybody off,” Collier explained. “I was very respectful. And I mean, I’m up there to do a job and to sing the national anthem and to sing it well, and to get the players and the coaches and the people in the stands pumped up. And I felt like I did that.”

Collier assumed the gesture would be taken as a healthy hometown prodding of the rival team but instead was branded as an offensive motion by the soft-shelled NCAA.

The Association responded to Collier’s story from FTW:

“The performance of the national anthem during NCAA championship events is a solemn moment for reflection and mutual respect for all championship participants and fans in attendance. Following his national anthem performance during the Women’s College World Series – during which the performer inappropriately supported one participating team, taunted the other team, and disrupted participating student-athletes and coaches by attempting to interact with them – he was asked not to perform during the Men’s College World Series.”

“I’m a neutral party and showing my support or lack of support for a certain team after the anthem, I can see how somebody could be upset with that,” Collier added. “But the reason I posted wasn’t because I was upset that they said, ‘Hey, you shouldn’t have done that.’ It was because they called the Horns Down an offensive gesture. They said I mocked the other team. Those words specifically, are why I posted about it. Saying that I’m making a mockery of a participating team because I put a Horns Down is ridiculous.”

The A&M grad is backing off despite the NCAA’s warning.