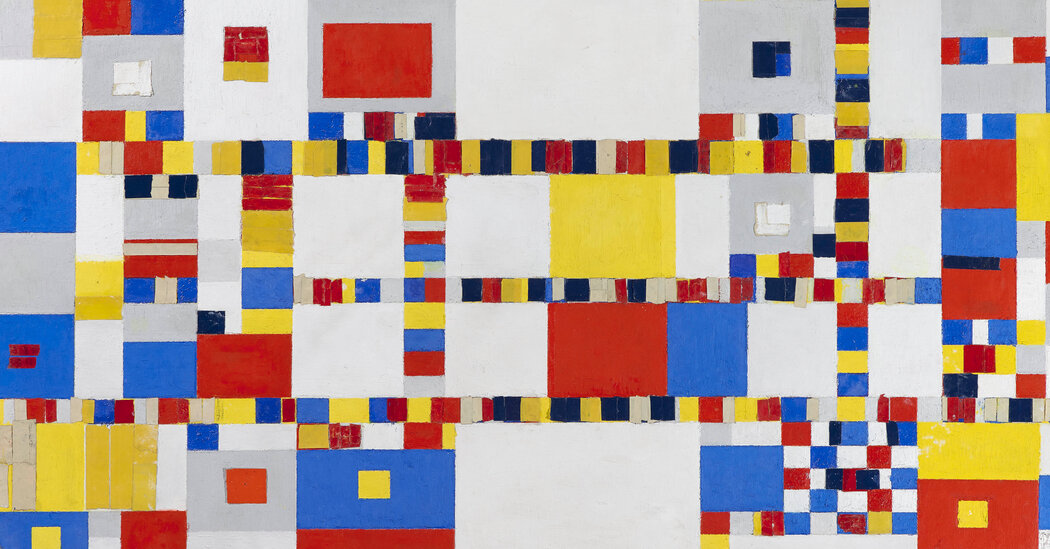 THE HAGUE — The best way to understand the work of Piet Mondrian, said Caro Verbeek, the curator of a show devoted to the Dutch artist at the Kunstmuseum here, is to dance in front of one of his paintings.

On a recent tour of the show, Verbeek said Mondrian’s work was best appreciated as a multisensory “kinesthetic” experience. If you prefer not to dance in the galleries, she said, you can try listening to music, or perhaps smelling a particularly complex scent as you gaze at his paintings.

To demonstrate, Verbeek, strikingly clad all in black with bright green shoes, stopped in front of one of Mondrian’s red, yellow and blue paintings, his final masterpiece “Victory Boogie Woogie,” and began to stomp and clap.

“Two people dance in complete opposition,” she explained as she moved. “That’s what interested Mondrian: opposition between lines, directions, shapes and colors.”

She took a few more jaunty steps on her own before enlisting a passing museumgoer to join her. Rather than doing the kind of sporty swing dance one might typically associate with boogie-woogie, however, Verbeek performed a more rectilinear box-step, instructing her partner to pivot right while she swiveled left.

The show Verbeek has curated, “Mondrian Moves,” on view through Sept. 25, offers us a new way of thinking about the artist’s work. Best known for his grid paintings that use a limited palette of primary colors, Mondrian is often regarded as static, rigid, depthless and unemotional.

Yet Verbeek said Mondrian strove for the opposite: a dynamic sensory experience that could trigger a kind of spiritual exhilaration.

“You can say that Mondrian wasn’t even a visual artist,” Verbeek said later in an interview. “He was a composer. He was looking for that equilibrium and he used visual art, but only as a gateway to something invisible that lies behind those paintings.”

Piet Mondrian was born 150 years ago this year, presenting museums with an occasion to look back on his body of work and its impact on visual culture. In addition to the Kunstmuseum’s exhibition, the Beyeler Foundation in Basel, Switzerland, just opened “Mondrian Evolution,” a show of 89 of the painter’s works, more than 50 of which are on loan from the Kunstmuseum.

The Beyeler exhibition, which runs though Oct. 9, emphasizes the development of the artist’s style, focusing on his early landscape paintings, and how his love for the natural world evolved into abstraction.

Ulf Küster, the exhibition’s curator, said that Mondrian was a man of great feeling, and that some of his first critics assumed that his radical use of primary colors was a sign of lunacy: “They said, ‘That man must be mentally ill.’”

Recent research on Mondrian has revealed that “he was really influenced by jazz and that he was a very wild dancer,” Küster said by phone from Basel. The artist Lee Krasner, one of Mondrian’s contemporaries in New York, “said that it was hard to dance with him because he was always inventing new steps,” he noted.

Mondrian was a fan of American jazz and would play it on the gramophone for visitors to his studio, said Küster. He also attended Josephine Baker’s dance performances in Paris. When he was living in Paris in 1928 and learned that the Dutch government had banned the Charleston because of “the danger of sexual stimulation,” he wrote to a friend to declare that if the ban was upheld, “it will be a reason for me not to come back,” according to J.J.P. Oud, who wrote a book about Mondrian.

In her own research, Verbeek found that Mondrian was also fascinated with early developments in electronic music.

In 1921, when the Futurist artist Luigi Russolo demonstrated some of the world’s first noise machines, called “Intonarumori,” in Paris, Mondrian wrote to his friend, the artist Nelly van Doesburg, who was also a dancer and avant-garde musician, to say that he wanted to build an electronic music device.

He planned to use it as part of his “Promenoir” — the French word for a theater where people can walk in and out — an artwork that would incorporate noise, music and color projections, almost like an early disco. Mondrian described this project at some length in his theoretical writings, but he never actually built it.

Replicas of the early sound machines that inspired Mondrian are displayed in “Mondrian Moves.” Verbeek also commissioned a group of Dutch techno artists to create a new piece based on Mondrian’s ideas about music, a constellation of abstract sounds that clank and grind like the cacophony of industrial machinery.

Mondrian wrote three articles about noise machines in the art magazines De Stijl and Bauhaus, Verbeek said. In his 1922 essay “Neo-Plasticism: Its Realization in Music and Future Theater,” he searched for a direct correlation between sound and color.

Mondrian proposed the theory that each primary color could represent a musical note, while white, gray and black spaces on a canvas could stand for other kinds of noises. Regarding Mondrian’s grid paintings in this way, Verbeek said, one can start to “hear” him playing with color.

Verbeek’s exhibition includes other sensory elements that encourage visitors to regard Mondrian’s paintings from this new vantage. Verbeek also worked with perfumers to create scent sticks that museum visitors can smell while looking at models of Mondrian’s studios in Paris, London, The Hague and New York. The Paris scent smells like furnace coals; the New York stick is a bit sweeter, like a men’s deodorant.

Küster at the Beyeler said Verbeek’s new interpretation and approach were “extremely refreshing,” adding that he had invited her to lead a clapping workshop with visitors at his exhibition.

A focus on sensory experiences, Küster added, also related to Mondrian’s long-term adherence to Theosophy, an occult movement that sought “a mystic conception of cosmic harmony,” as Mondrian put it, through nature. Mondrian wanted to “create a spiritual space between the viewer and the work of art,” said Küster, and he saw his abstraction as “a form of meditation to get to this divine truth.”

Mondrian’s work is open to all sorts of interesting interpretations, Küster said, in part because the artist continually reinvented himself and explored various realms of experience: This lack of stasis or rigidity, perhaps, is why he continues to fascinate.

“I still think that he is a visual artist, really,” said Küster. “But one should define what a visual artist means,” he added. “The experience of looking at his art is not limited to the eyes.”